We now turn our attention to the second biggest complaint of comms professionals: communicating change.

Under these circumstances, clear and strategic communication becomes critical…

Before we get too far down this road, let’s stop and think. When and why is change bad? When does it require a special effort to communicate?

We don’t seem to mind most changes in our private lives. Now that we’ve all become one-person media outlets, we can’t wait for something to happen to us—good or bad—so we can post it on Facebook. When nothing is happening, we post inspirational messages to help ourselves and the loved ones prepare for what’s to come.

So, why do we never want anything new to happen at work?

We know why. We usually have some say over what happens in our private lives. If sudden disaster befalls us, we can at least groan and moan to our hearts’ content. We get to call it what it is. A mistake. A catastrophe. A stinking mess. We get to ask for sympathy and support and bathe in kindness and generosity of friends and strangers.

Not so at work.

First, how much say does the typical employee have over these so-called changes?

If the company plans to take something away from employees, like jobs or benefits, it won’t likely ask for their input. On the contrary, the management will judge it common sense to postpone any communication until after the fact.

What is common sense to most employers is a common fallacy to a few great ones. SAS and Edward Jones both survived the Great Recession of 2008-09 with no layoffs. When faced with declining revenues, both companies turned to employees for creative solutions. Both found their people more than willing to tighten their belts for the common good. In the end, Edward Jones saved more than enough to offset the losses. While SAS did so well in the midst of the downturn that it hired many of the talented employees let go by the competition.

Why do so few employers involve their people in company-saving decisions? And if your whole communications strategy is to excommunicate your employees from life-changing choices, how well can you expect it to work?

But let’s put the tragic aside for a moment. What about all these other changes the companies must undergo to keep up with the times? Technology upgrades. Reorgs. Processes and procedures.

There are changes that people ask for and those that they don’t. Nobody complains when a change fixes a problem, takes a load off someone’s shoulders, or just helps people get through their day. These changes come from listening and responding to employees’ needs, so communicating the results is a piece of cake.

By contrast, ramming a new and obnoxious procedure down people’s throats wouldn’t work any better if you hired a team of Hollywood writers to spread the news. If you want it to go down easy, you need to put yourself in the shoes of those on the receiving end. Will the change make them feel valued, trusted, included? Or the opposite? Taking the employee side into consideration before making your choice is communication; asking them to take your side after the fact is not.

Okay, but even the best managers make unpopular choices.

They do, but the process is important. Great companies believe that letting people have a say makes it easier for them to accept the outcome. That said, if you don’t know how to involve your people, you most likely won’t. It will seem easier to make up your mind behind closed doors, even if you pay for it later with disgruntlement and miscommunication.

To do it right, you must have a plan. In what form will the discussion take place? What is the process for making the final decision? The answers to these questions are highly specific to the task. In Who the hell Wants to Work for You, I have a few examples, especially in Chapter 19, Give Them a Voice.

Since I’ve discovered these practices, I’ve used many of them at Axero and have never regretted doing so. It might take some trial and error to create a workable model. And you might need to rethink it every time a major decision is at stake. But I never feel better about myself as a manager than when I tear down the walls between my employees and myself.

Now, let’s say you’ve listened to all the voices and you’ve weighed all possible outcomes. You’ve set your priorities, and you gave your decision. Will this satisfy every one of your employees? Most likely not. Nor is it your job to please everyone. The question is—what to do about all the wailing and moaning when unpopular changes are taking place?

The technical term is employee feedback, and, just as you did before, you want to keep giving it legitimacy and space. It’s a common mistake for companies to shame employees for being Negative Nancys. Doing so discourages communication and drives discontent underground. Consider that open criticism is the best form of opposition. Much better than passive-aggressive behaviors that flourish at many companies and are ultimately responsible for the employee disengagement crisis we are witnessing today.

If you’ve done a good job of listening while pondering your decision, then you know and understand your opponents. Don’t ignore them—include them in your plan. If the company is embarking on a drastic change—like Zappos’ quest for self-management, for example—many people will be predictably disappointed, confused and demoralized. Instead of letting the chips fall where they may, it’s wise to do what Zappos did: give them options. Transition plans for those who need time to get over the shock. Buyout packages for those who hate the idea.

So, it’s not the change itself that defies communication. It’s the communicator’s resistance to change that creates a problem.

As communicators, we resist change in two ways:

I started out by talking about communicating change in the workplace, and I ended up repeating the old maxims:

Turn the mirror on yourself.

Listen before you speak.

Do unto others as you would have them do unto you.

Thanks, Tim. That’s a real eye-opener!

If your company is going through a lot of changes, you might like my book, because it tells you how not to do it.

If your company needs help making these changes, you might like our internal communications software, because it will help you do just that. 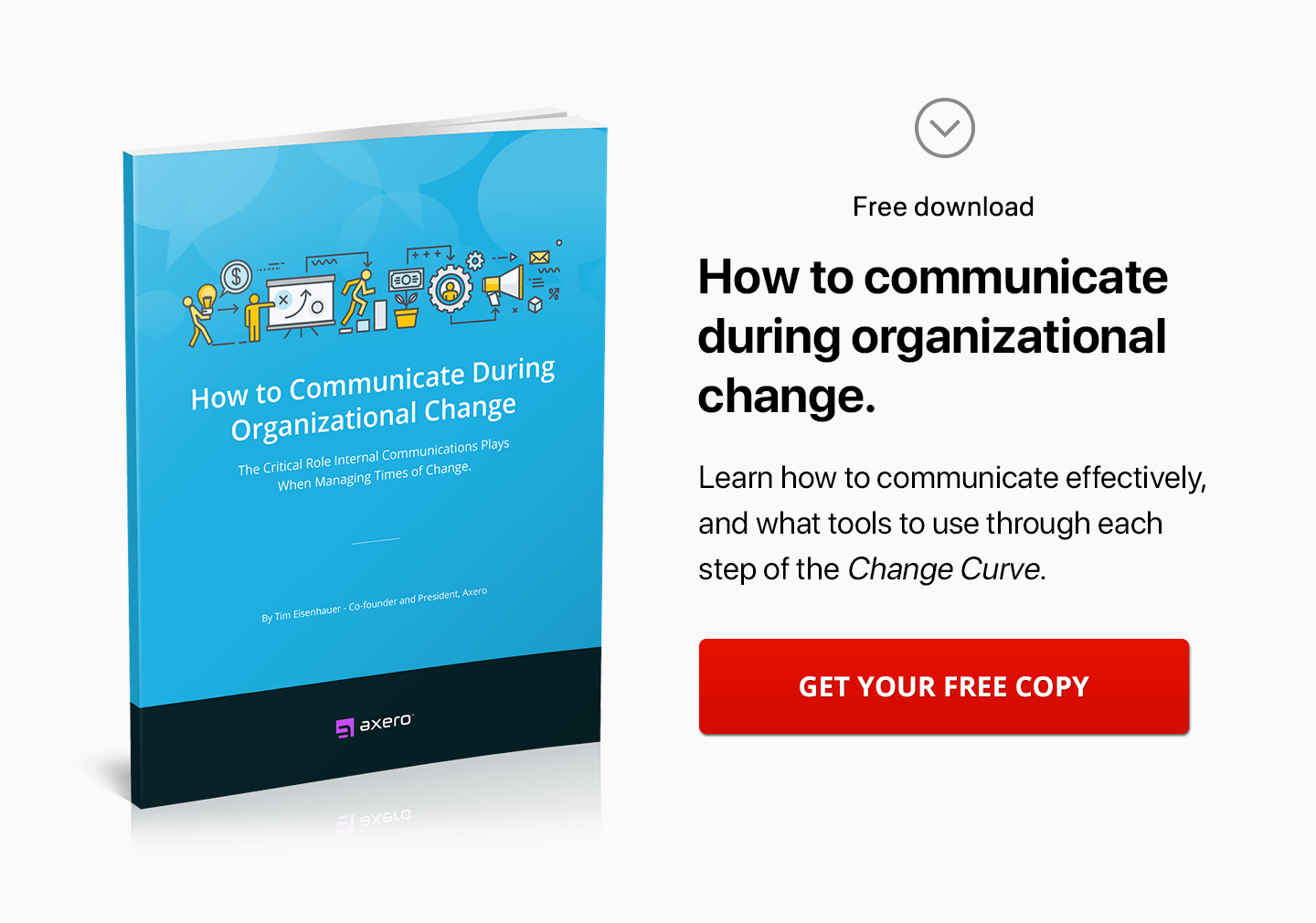