Why Gamification May be the Key to Increasing Employee Engagement.

Unless you’ve been living under a rock, you’ve no doubt heard about the new Pokémon GO game app for iPhone and Android devices.

This augmented reality game uses your device’s GPS to detect where you are and make Pokémon characters appear around you on your phone screen. The objective is to catch those rascally Pokémon – and the result is people are leaving their houses to chase down the imaginary creatures.

All because of a silly game on their smartphones.

Games are fun – and they can make the most mundane tasks (like walking) fun, too. Games give us positive feedback on our actions and achievements, help us create social bonds and make learning more engaging.

For these reasons, gamification can be extremely effective in the workplace, too.

First, a broad definition of “gamification.”

Gamification is applying elements of game-playing to non-game activities.

In the workplace, gamifying activities, applications and processes makes those things more engaging. In turn, gamification can …

Marketers have used gamification for years to spur people to complete surveys, go to websites and share their products. Really, though, the concept can be applied to almost anything you want to encourage people to do, or do more of.

You can even gamify commitment. Designer and developer Nathan Barry created an app called Commit, which helps people form habits by tracking activities they want to do every day. Think about all the ways something like that could be used in your workplace!

You could encourage people to …

Bonus: Want to get your employees as addicted to accomplishing on-the-job tasks as they are to collecting Pokémon? Download our quick guide to 6 reward types sure to get people playing to win.

It’s All in Your Head.

So why does gamification work so well to improve behavior and encourage employees to accomplish boring tasks?

Simply put, gamification taps into the brain’s own natural wiring.

It’s the same reason many of us drink coffee in the morning. Or get addicted to Pokémon, Farmville, or SimCity (which, I am currently hooked).

By rewarding your employees for performing tasks, you create that reward compulsion loop in the workplace – and a natural dopamine environment.

Boosting dopamine in your employees’ brains has an added benefit that many leaders don’t realize. Generally, neurotransmitters help keep us alert and on task. They’re the brain’s message relay system. In addition to bringing on that pleasurable feeling, Dopamine, specifically, affects the following:

So by gamifying tasks in the workplace, you’re not only making employees feel good, you’re also improving their ability to do their jobs.

So how can you use gamification in the workplace?

“If you can create an environment where people not only take the desired actions, but they also do it joyfully…it will always be useful,” says Yu-Kai Chou in this article from the International Association of Business Communicators. Chou is a gamification expert who discovered that a deeper understanding of human motivation and what makes games “fun” can create long-term employee engagement.

This applies to internal communications teams as much as it applies to human resources and management. If your objective is to engage employees through communications, it’s time to think about strategic gamification.

The simplest way to gamify almost anything is to assign point values to specific activities. From there you can attach rewards to point values; make it a contest by giving the “game” a time limit and rewarding the person with the most points; or even assigning levels, ranks or titles to people who reach certain point values.

We have seen such astounding results from gamification in our own workplace as well as our customers’ workplaces, gamification functionality is now part of the core fabric of our intranet software, Communifire.

No matter how you ultimately decide to gamify activities in the workplace, there are three elements to be aware of within that reward compulsion loop: Reward, Reinforcement and Motivation.

The reward system is the heart and soul of gamification. Basically, when an employee does something you want them to do, they get a reward.

If you want employees to collaborate and share their work, reward them by giving them points for asking/answering questions, writing/commenting on posts, and uploading files for team use.

If you want employees to compete against one another, put everyone’s scores on a dashboard where they can see their points add up instantly. (Bonus: Employees now have something to watch besides the clock!)

A few years ago, LiveOps deployed a reward-based platform for its hard-to-retain call agents. Agents could earn badges and points by completing additional training, earn reward points for increased call conversion (points were tracked on public leaderboards), and get badges for sharing knowledge, coaching and networking with others.

Participating agents outperformed their peers by a whopping 23%. But that’s not all. Customer satisfaction grew by 9%.

Our brains are wired to repeat actions that have given us pleasure in the past. Therefore, positive feedback is always more effective than negative feedback or negative reinforcement.

In other words, people prefer the carrot to the stick. So employees will be more likely to continue desired behaviors when those behaviors have a positive outcome for them.

On the flipside of that, when employees are punished for not completing an activity, they are more likely to disengage from their roles and the company.

Psychologist B.F. Skinner conducted an experiment in the 1920s that illustrates this perfectly. He put a starving rat in a box with a lever that, when pressed, would release a food pellet. The rat learned very quickly to press that lever in order to get food.

After all, willpower is a limited resource.

Personally, I like Scientific American‘s simple breakdown of motivation:

To wrap this up in a nice little bow, when employees are lacking motivation, it means they’re feeling forced, they don’t see the value of the activity, or they doubt their abilities.

Games can improve motivation in all three areas. The reward compulsion loop makes people seek out that dopamine boost autonomously. The rewards people get for achieving game goals make the activities seem more valuable. And the more people play these games, the better they get at the activities involved – thus the more motivated they are to keep doing them.

Bonus: Never get stuck for reward ideas again. Download our free guide to 6 reward types sure to get employees playing for keeps.

Though we’re talking about gamifying work activities, we’re still talking about games. So I must include this captivating TED talk here, because it blew my mind. In it, Tom Chatfield outlines the seven ways video games engage the brain. The examples he uses are astonishing …

How to Gamify Your Intranet to Boost Employee Engagement.

Now you understand how gamification taps into employees’ natural brain function and psychology. So how do you use this knowledge for good?

There are many ways to gamify activities, applications and processes in the workplace. You can create contests, add gamification functionality to the digital tools your employees are already using (like the company intranet), incentivize problem-solving – you can even turn everyday processes and procedures like onboarding into games.

To make gamification effective for employee engagement, though, you need two ingredients:

Game mechanics are the rules that govern the game. It’s the logic behind the system of incentives and feedback as those things relate to behaviors. Game mechanics are the basic building blocks of the game and trigger the reward compulsion loop in players. It’s how many points it takes to win, how many players are involved, and what timeframe the game will operate in.

Within Communifire, we’ve created game mechanics around points and badges. You can assign specific rewards for certain point values, and even prioritize activities so those needing to be completed the soonest will be worth more points. As users accumulate points, they earn badges that can also be worth certain rewards (or the badge itself might be reward enough!). You can decide what to do when people earn badges. Maybe you give them a gift card when they earn badge XYZ. Game dynamics is the reward type and schedule. Game dynamics takes into consideration the players’ personalities to deliver rewards in the most meaningful way for the actual players of the game.

Richard Bartle came up with a taxonomy of player types to help game developers. Check it out. It might help you gamify your own work processes. So don’t stop at creating a point-and-reward system for completing an activity. Consider who will be playing the game – and adjust the rewards, and the timing of those rewards, appropriately.

In other words, reward with a purpose – and make it personal. Try these:

Remember, you can reward entire teams, too. If the whole team responded with comments to the latest blog post you put up, have their lunch catered the next day. If the team hit all of that month’s incremental goals, sponsor an afternoon of mini golf.

No matter what, and this is very important, find out more about the people you’re trying to incentivize through gamification. Who are they? What makes them tick? What do they like? What do they dislike? This way, you can ensure the rewards will actually be strong incentives for your employees. There is no one-size-fits-all answer, here. Just make sure the system is consistent, fair and valuable to the players.

Gamification is a great way to encourage behaviors and incentivize activities in the workplace. It triggers the reward compulsion loop in employees’ brains and turns mundane, tedious tasks into opportunities for reward.

I hope you’re motivated to try this in your own workplace – so I’m going to leave you with 5 things to consider as you’re creating your game:

Now, I’m off to play SimCity and pay real money for virtual paint and shovels … 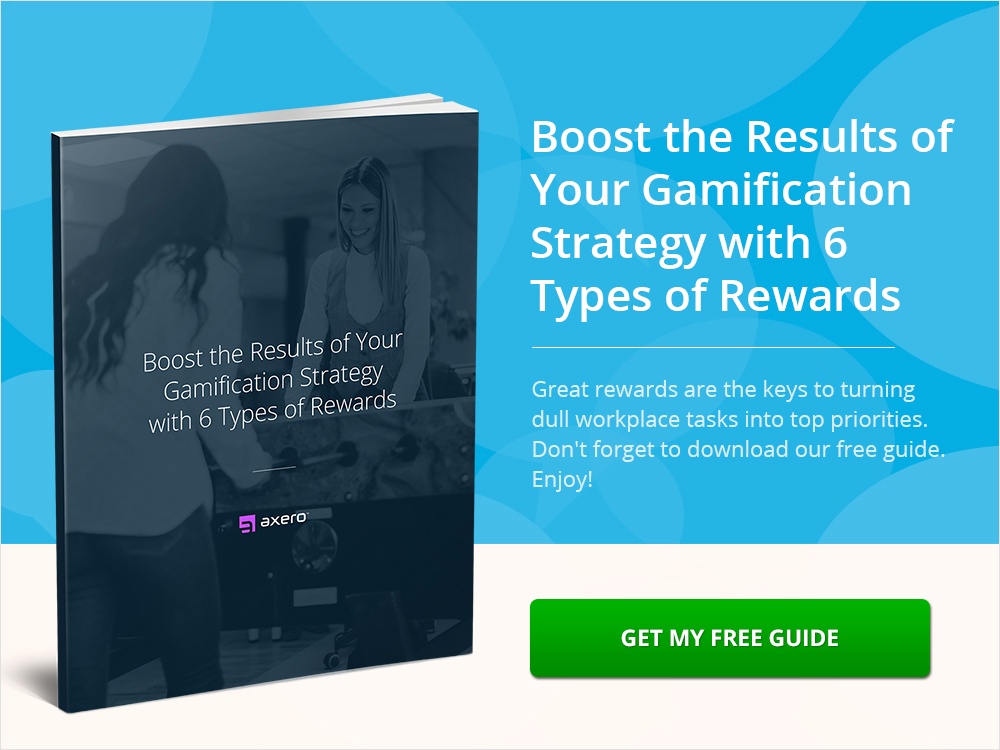